Swansea City completed their spectacular rise through the leagues by clinching promotion to the first division for the first time in their history with a 3-1 away win at Preston. Just six years earlier, the Swans had been forced to apply for re-election to the Football League after finishing bottom of the Fourth Division but the win at Deepdale secured a third promotion in 4 seasons for John Toshack and his side.

Swansea went into the match knowing that a win would be enough to pip Blackburn Rovers to the third and final promotion place thanks to their superior goal difference. Preston needed the points for very different reasons. Languishing in 20th place in the league, they sought to ruin the swans’ promotion party in order to keep their survival hopes alive. 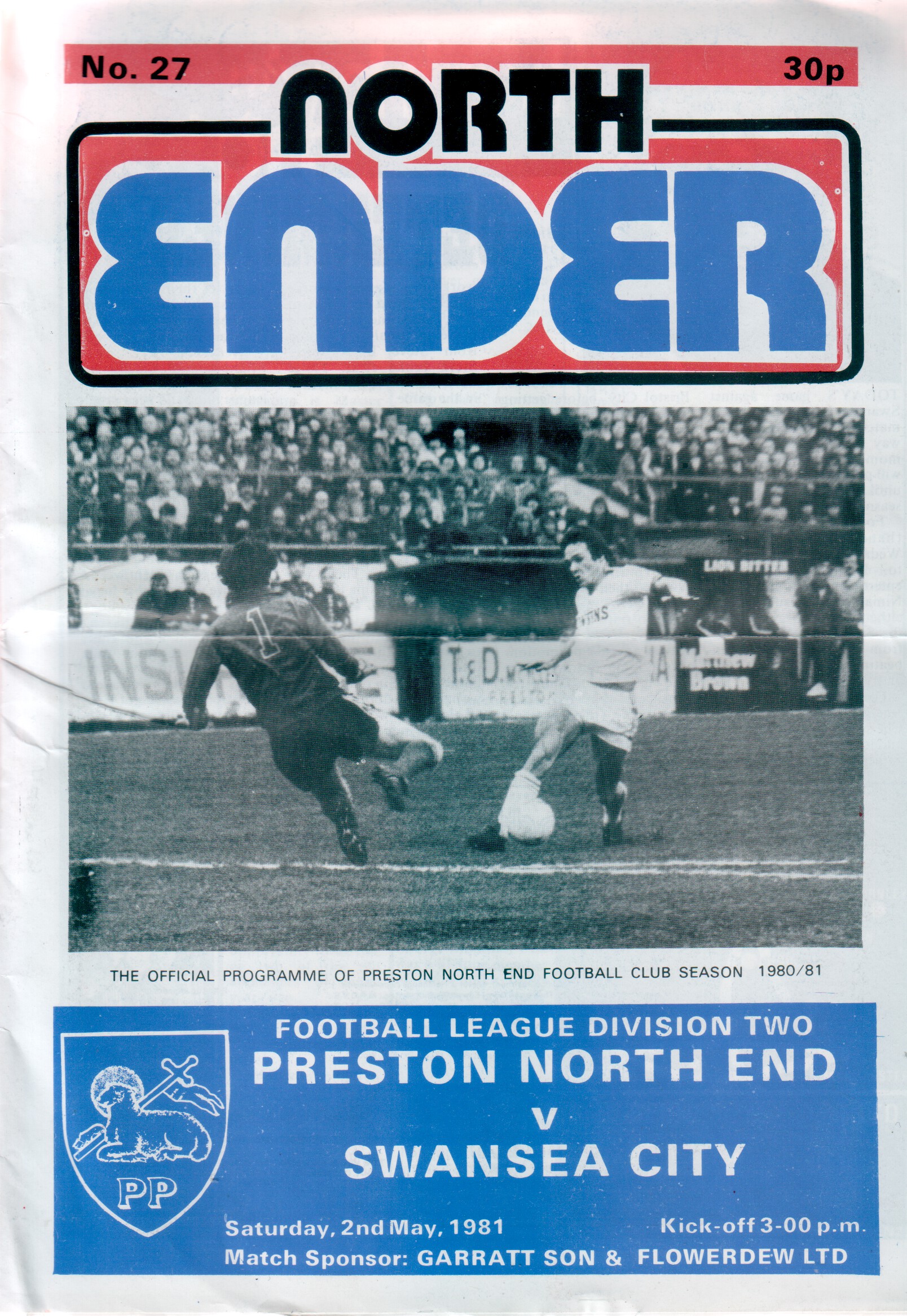 The Swans were backed by more than 10,000 supporters who made the long trip to North West England. This was the biggest away support for the South Wales club “since Swansea met Preston at Villa Park in 1964” (South Wales Evening Post, 2 May 1981). Unusually, the Preston supporters were outnumbered by jacks in their own ground. Throughout the match, the travelling contingent backed their team vocally and “included Cwm Rhondda and the Welsh national anthem in their musical repertoire” (South Wales Evening Post, 2 May 1981).

The Swans were without captain John Mahoney who picked up an injury in a 2-2 draw with Luton Town at the Vetch Field earlier in the week. In the opening periods of the game, both sides enjoyed periods of pressure but it was Swansea who struck first. After cutting inside from the left wing, Leighton James broke the deadlock with 24 minutes on the clock. Preston goalkeeper Roy Tunks stood little chance of saving James’ shot which sailed over him and into the top corner. Within minutes, the swans had doubled their lead after Neil Robinson’s cross found an unmarked Tommy Craig whose shot struck the Preston keeper before trickling over the line. The Swans now had a foot in the door of the First Division and left the pitch at half time with a 2 goal lead following a fast paced first half. 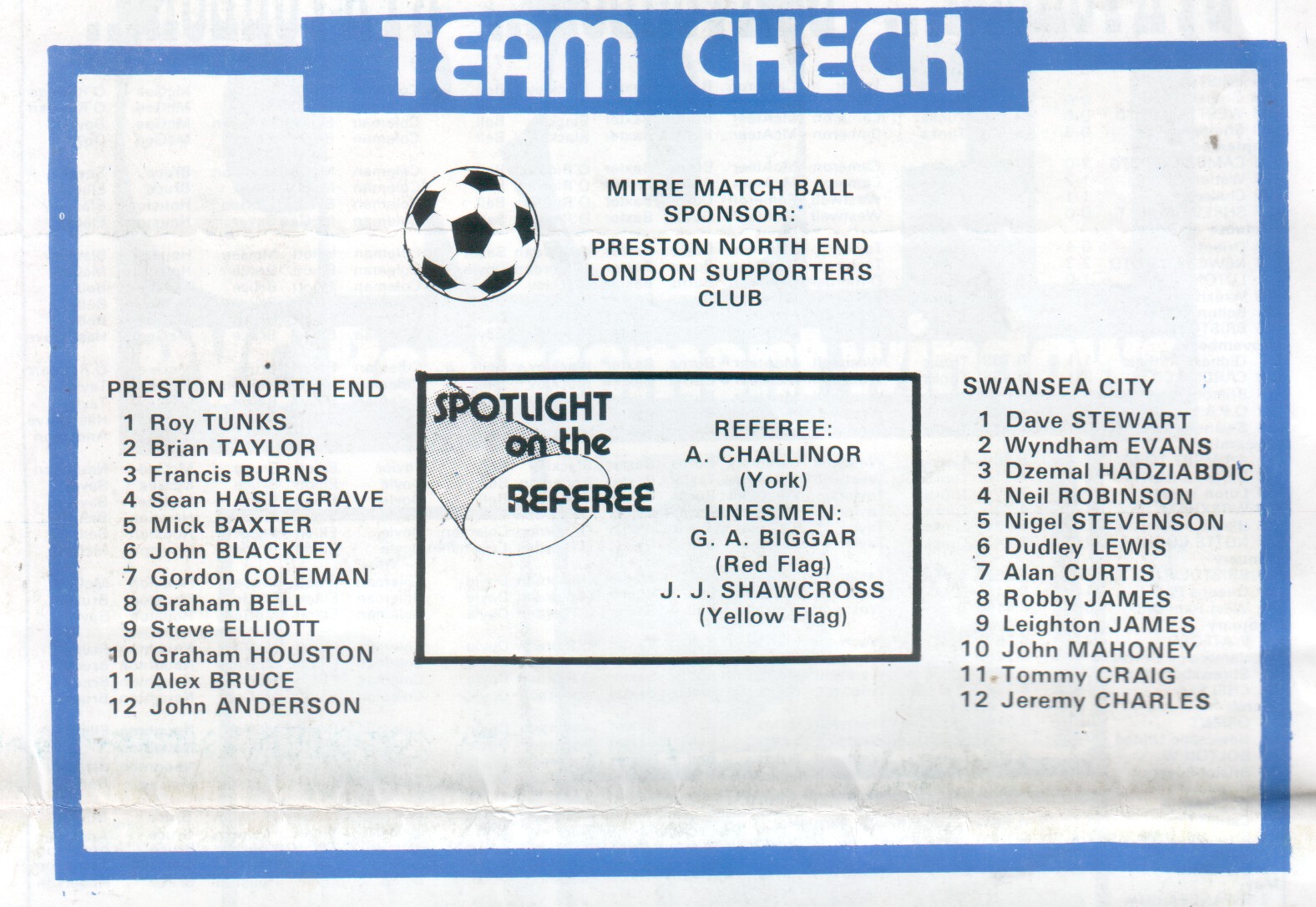 Determined to beat the drop, Preston had no choice but to push forward in the second half and several convincing attacking moves reminded the travelling Swansea fans that the game was far from over. The pace of the second half was slower than that of the first and as the game progressed, Swansea seemed the more comfortable of the two sides. Alex Bruce pulled one back for Preston on 78 minutes after Swansea goalkeeper David Stewart failed to deal with a high ball in the box.

It was now nail-biting time for the many thousands of Swans fans inside the ground. With 87 minutes gone, Jeremy Charles put the game beyond doubt with a powerful drive from just 10 yards out which sent the travelling supporters into absolute delirium. The match was won and Swansea City had secured themselves a place in the top flight of English football for the first time in their 69 year history.

However, this was not the end of the season for the Swans who still had a Welsh Cup final against Hereford United to look forward to. Having already qualified for the European Cup Winners’ Cup due to Hereford’s ineligibility to represent Wales, the Swans added some silverware to their cabinet following a 2-1 victory over the Bulls in the final which was played over two legs.

The 1980-81 season and particularly the promotion clincher at Deepdale will live long in the memories of all Swansea fans who were fortunate enough to experience them.The speed of Swansea’s rise from the Fourth Division to the First earned them praise from many highly respected figures in football. Never before had a side managed to climb the league system as quickly as the swans did under John Toshack. Bill Shankly, whom Tosh had played for at Liverpool, applauded the club’s remarkable achievements. In an interview with BBC Sport shortly after the match at Preston, he asserted that Toshack could be “manager of the century”.

“This is the greatest day in the history of Swansea City and there’s no reason why they can’t stabilise themselves in the big league” he added.

Read the memories of one fan who was there that day

Read the Evening Post’s 25th anniversary special edition, looking back at the day and the team 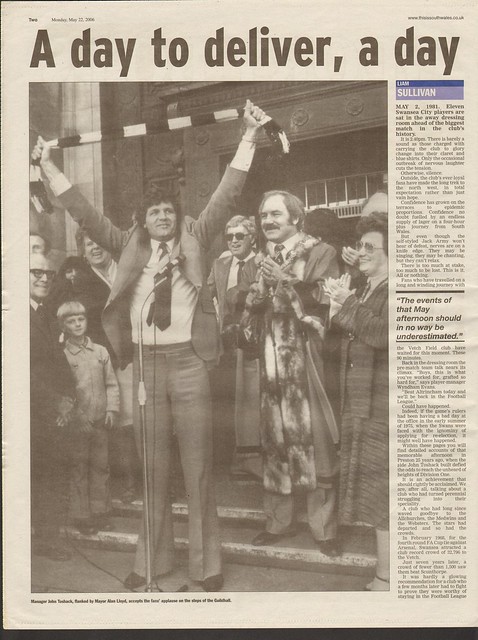