Football was played on the Vetch by local amateur teams from the late nineteenth century. Athletics and cycling also took place at the ground at this time.

The land was owned by the Gas Works and its football team played there before the new Swansea Town club leased the site.

When the Swans took over, the ground was at first open with banking later laid with railway sleepers. The ground was chosen because it was a central location in the town and had space for expansion. 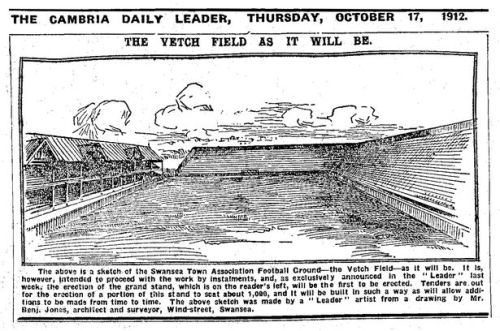 In the first season, the pitch was mostly cinders and so bad that players wore knee pads.

The South (centre) Stand was built in 1913. It consisted of wooden benches and also housed the dressing rooms and offices. In later years, the top (west) end of the stand became the family area. The clock also became infamous for often being wrong.

During the mid-1920s some noises were made about eventually increasing ground capacity to almost 60,000 but, despite confident pronouncements about the future, there does not appear to have been any realistic or affordable scheme properly to upgrade the ground.  As result, the Vetch Field was only improved in stages, one side at a time, as resources became available.

The double Decker West Stand was built in 1927 and towered above the rest of the ground. It marked a degree of confidence at the club that growth and the first division was possible.  The average league attendance at the Vetch in 1926-27 was 14,286. 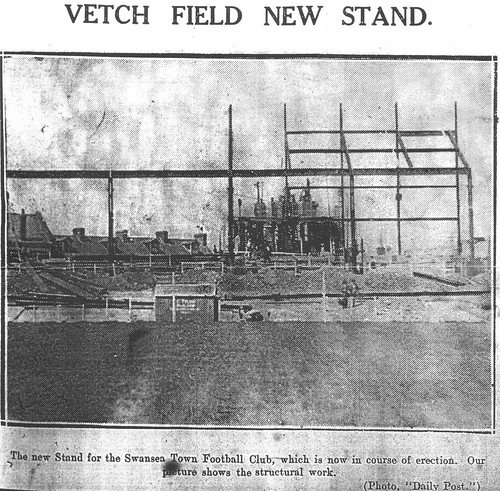 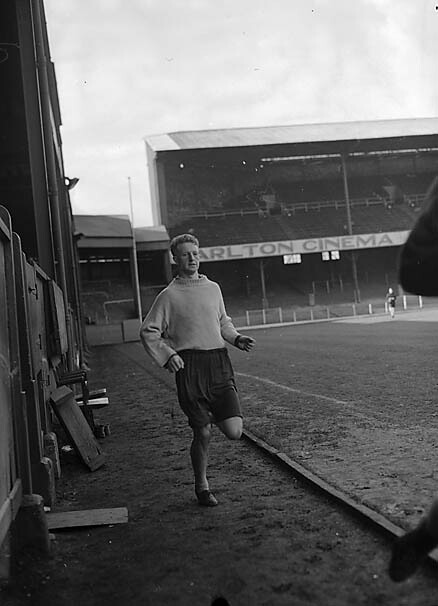 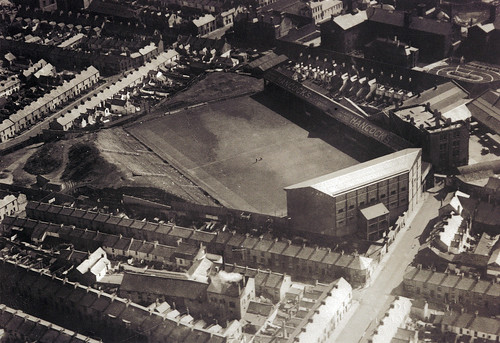 And, as time went on, the shape and size of the physical environment became more and more of a constraining factor.   The pitch itself simply could not be positioned parallel to the surrounding streets, and this meant that two of the banks could not be extended properly along the full side of the playing surface.  As a result, in two of the corners neighbouring back gardens came to within a few feet of the pitch, and both the East Bank and the main Bank had to be tapered sharply at one end.  This gave the Vetch Field its unusual lop-sided appearance, and no matter what improvements were made the ground was always to look as though a square peg had been forced into a triangular hole.

The North Bank remained the main terrace but standing on it often meant being pushed around and struggling to see.  It was upgraded in 1951 with its top being leveled out, new entrances installed and its front lowered to beneath pitch level. 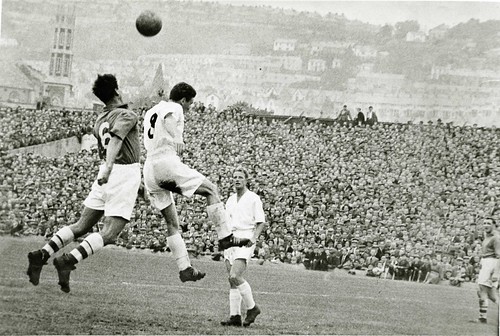 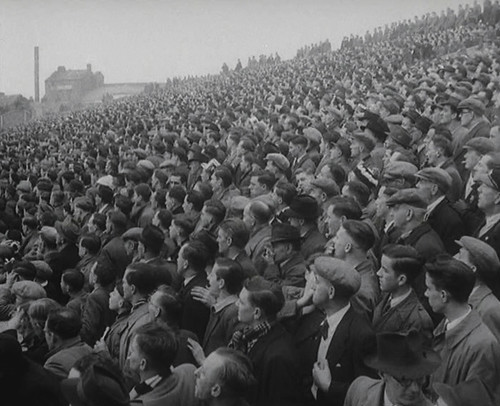 The North Bank had its roof installed in 1960, the same year floodlights were installed. They were first used in a friendly against Hibernian pictured below. 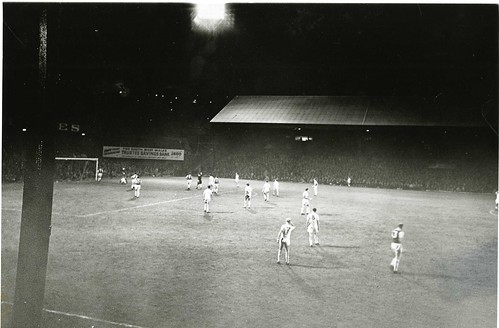 In 1968 a record attendance for the crowd was set when 32,796 watched Swansea play Arsenal in the FA cup. The crowd was so large that many were unable to see much and the squeeze was deeply uncomfortable. This game also saw some of the first serious hooligan trouble at the Vetch. 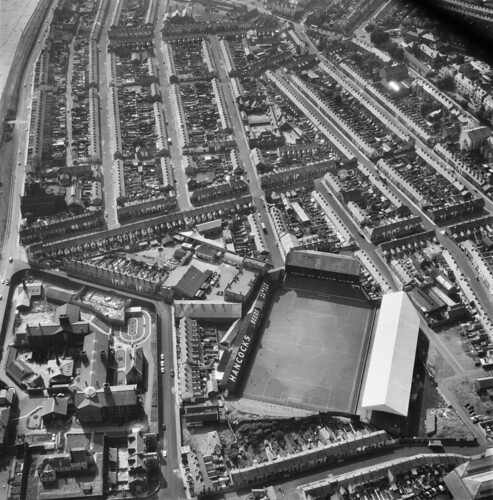 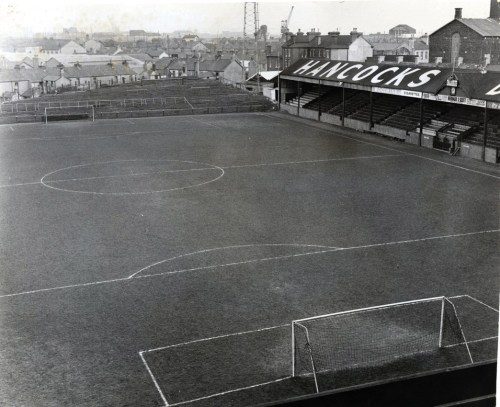 The east terrace was always oddly shaped because of the gardens in the street behind. Indeed, in the 1920s some residents had actually charged people to watch big games from their gardens. Then the club hung sheets across the space to block the view and, as is clear in the above picture, by the 1970s a score board obscured the view.  It was also very close to the pitch as is clear below. 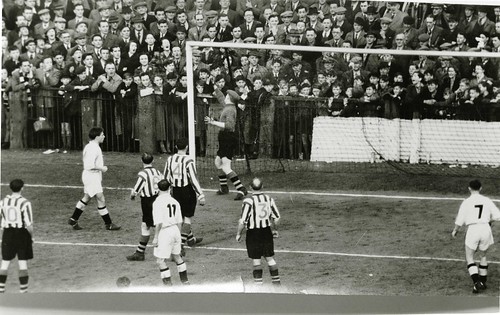 At a cost of almost £800,000, the East Stand was built in 1981 and originally intended to run the length of the pitch, replacing the centre stand. It did replace the open east terrace behind the goal and had 1,841 seats above a covered terrace. Like the terrace before it, the stand never covered the whole of the rear section of the pitch because of the encroachment of neighbouring houses. Those houses enjoyed a good view through the gap, especially after the removal of the score board. 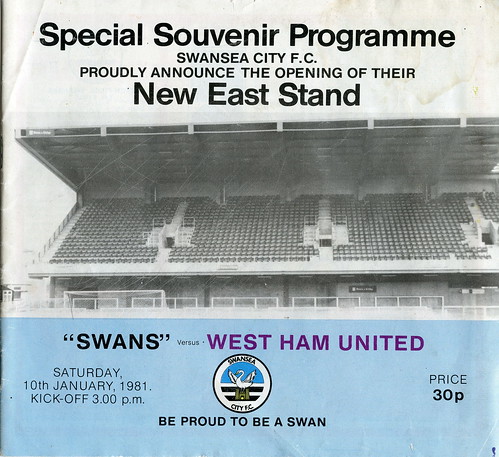 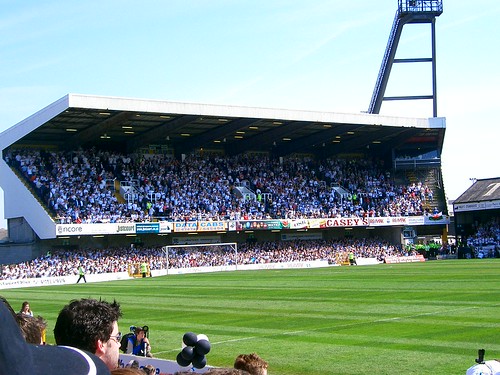 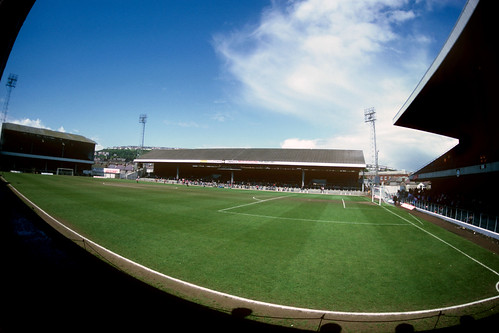 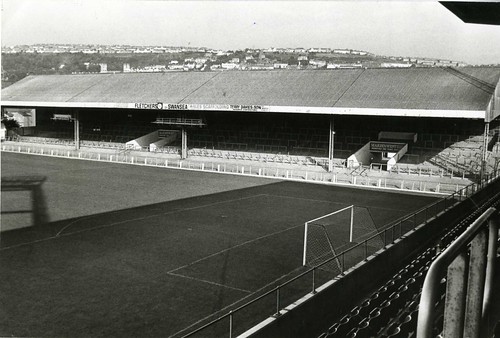 Fences went up in front of the North Bank in the 1970s to control the crowd. They eventually came down in stages in the 1990s as crowd behaviour improved and crowds dwindled. 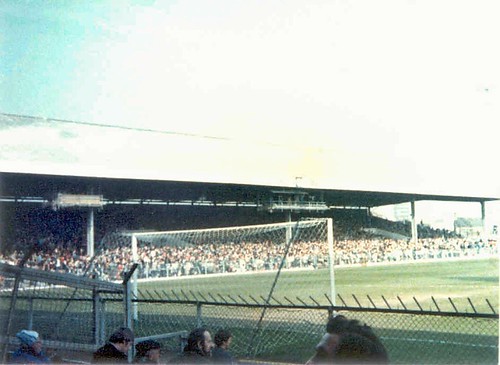 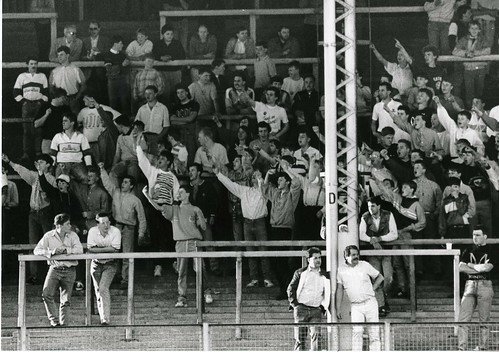 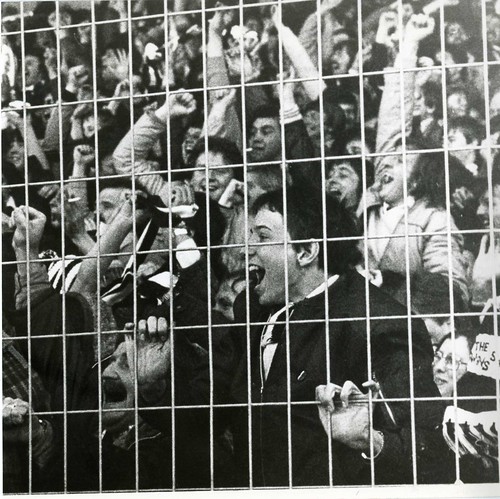 The early 1980s saw major investments in the ground, with new terracing and barriers installed and access improved. This was achieved with money from the Football Grounds Improvement Trust.

The wooden west stand was deemed unsafe after the Bradford City fire in 1985. The upper tier was closed immediately along with a section of the main stand. This brought the capacity down to 23,830, of which 2900 were seats.

In the late 1980s the whole west stand was demolished. It was replaced by a new West Terrace that held away fans, although in the last seasons at the Vetch it was split up to create extra capacity for home fans as gates grew again.

In 1990 the rear of the North Bank were shut down due to safety concerns. But the ground remained dear to supporters and was capable of generating a loud and vociferous atmosphere. Capacity fluctuated in the final years due to ongoing safety issues and maintenance work but it settled at around 11,700. 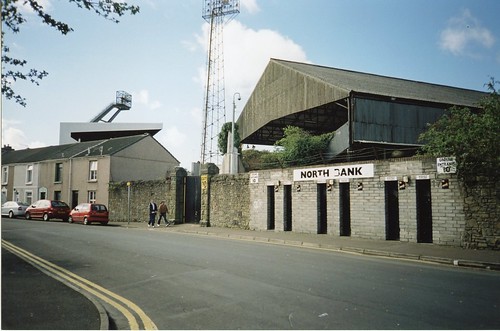 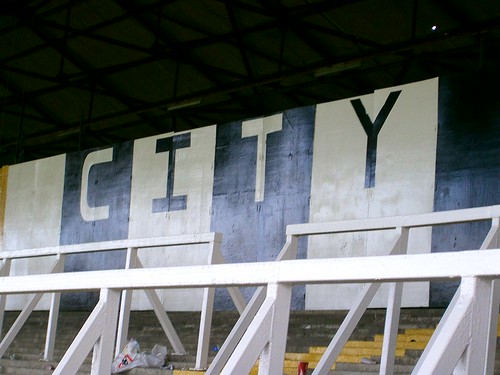 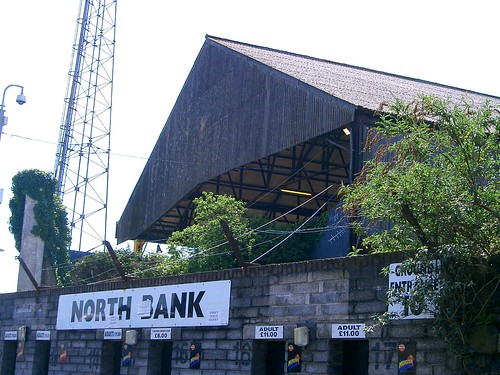 The last game was in 2005 and an emotional affair. 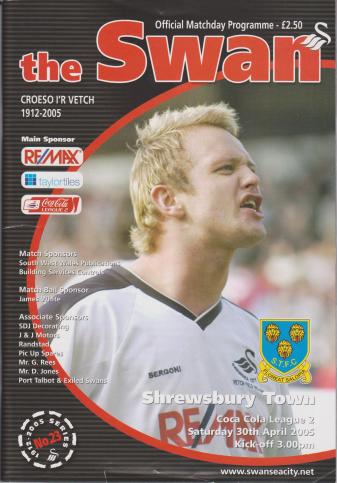 Programme from last league match at the Vetch

7 responses to “The Vetch Field”