The Vetch and the Olympics in 1948

The Vetch and Olympics might seem to have only a tenuous connection, and strictly speaking it is not a Swans-related one, but several older fans have mentioned this game as having been a very memorable one.

In late August 1948 (in the same week that Glamorgan clinched cricket’s county championship for the first time) a Welsh Amateur XI drew 0-0 at the Vetch with an Indian XI who were preparing for the Olympic football tournament.  The fixture was played in front of a crowd of 15,000 and it was described as ‘the best game for seasons at the Vetch’.  What is perhaps most remakable is that all but two of the visitors played without boots on, but the Evening Post report was still able to praise the ‘precision passing of the Indians.’ 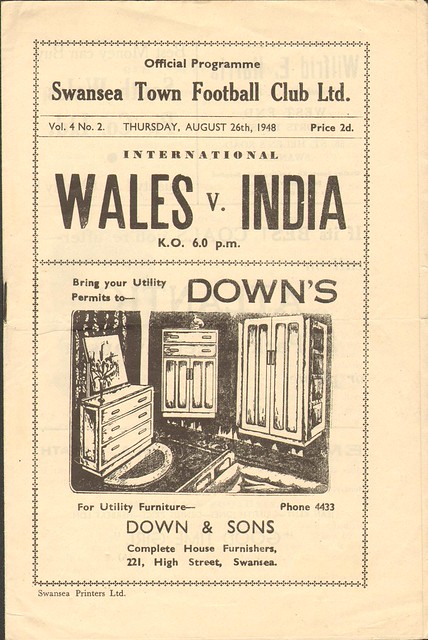 After the game a celebration dinner was held at the Mackworth Hotel in Wind Street.  A speaker described the Indians as a team of gentlemen’.  The tour manager, Mr Antharay, told the audience that the Indians had learned the game from the ‘British, Welsh, and other regiments in India.’  The hope was expressed that the game was ‘The forerunner of many more meetings’.  Sadly this was not to be the case, and sadly for the Indians they were knocked out in the first round of the tournament when they lost 2-1 to France.