We are grateful for the help of Swansea Central Library, who let us use their Discovery Room for our first Open Day. Particular thanks are due to Local Studies Librarian Gwilym Games.

We had some great encounters with Swans fans:

Recording an interview with Roy and Jason Griffiths 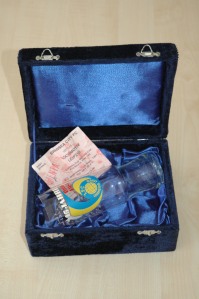 Derek the Fan, who brought in his song and some of his programme collection.

First Day Cover issued by the Post Office on the occasion of the Swans’ promotion to the First Division in 1981. Brought in by Leighton Radford