Swansea Town’s 1963-64 league campaign is often forgotten by fans and will never be hailed as successful. In fact much of it can be described as a season long relegation scrap in the Second Division, accompanied by off-field financial troubles. The Swans’ F.A. Cup run of the same year, on the other hand, is fondly remembered as one of Swansea’s greatest achievements in its entire history. In 1926 Swansea reached the F.A. Cup semi-final for the first time, 38 years later they returned, this time determined not to fall at the final hurdle.

Under Trevor Morris’ guidance, Swansea Town triumphed over Barrow, Sheffield United and Stoke City. The Quarter-Final victory over Bill Shankly’s Liverpool (who went on to win the First Division title that same season) proved to be Swansea’s greatest moment in the tournament.  Goalkeeper Noel Dwyer provided the performance of his career which ensured Swansea’s progression to the Semi-final. 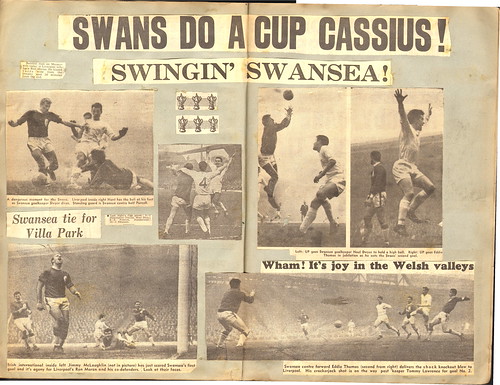 On the 14th March Swansea Town travelled up to Villa Park to match their wits against fellow Second Division Team Preston North End. Thirty thousand high-spirited supporters joined the team on their journey to the Midlands, many confident of a Welsh victory having witnessed a 5 – 1 thrashing of Preston at the Vetch earlier in the season. The Jack Army, who proudly sported Swansea rosettes and hats made from local newspaper cuttings, also carried home-made paper swans to dispel any doubt over their allegiance.

Despite the fact a number of league games were postponed that same day, due to torrential downpours, the match went ahead. Swansea won the toss, and even under the adverse conditions started the stronger team. A professional foul a yard outside the penalty area prevented Keith Todd from putting the Swans a goal up after 5 minutes, and an incorrect offside decision stopped Swansea from capitalising on their bright opening. However, their fast open play and first half dominance over Preston prevailed on the brink of half-time when Northern-Irish Striker, Jim McLaughlin, “swivelled superbly” and hit a low shot into the far corner.

A certain impetus seemed to have been injected back into the 30,000 Swansea fans as “Land of my Fathers” rose from the end of Villa Park where they were all standing. One journalist for The Times said “the soft expressive strength of it all made one’s spine prickle.”

Unfortunately Swansea’s superiority was short-lived. Preston came out after half-time a much stronger, more organised and more attacking team. They were awarded a penalty 53 minutes into the game which brought them level and with only 15 minutes left on the clock, centre-half Tony Singleton scored from 30 yards to give the Lilywhites a goal advantage.

As the game drew to a close Swansea’s attempts at a come-back proved futile. Like the paper swans the supporters were waving, their spirits had dampened. Preston had locked and barred the door and nothing could get through.

The game finished 2 – 1 to Preston North End. The Jack Army may have felt crushed, but they were proud of their boys. This small provincial club had taken on and defeated the best club in the country along the way, only to fall very late on in both the match and the tournament. The game itself was so closely fought, that many argue a different day would have provided a very different outcome.

Read more about the game and watch a newsreport of it here. 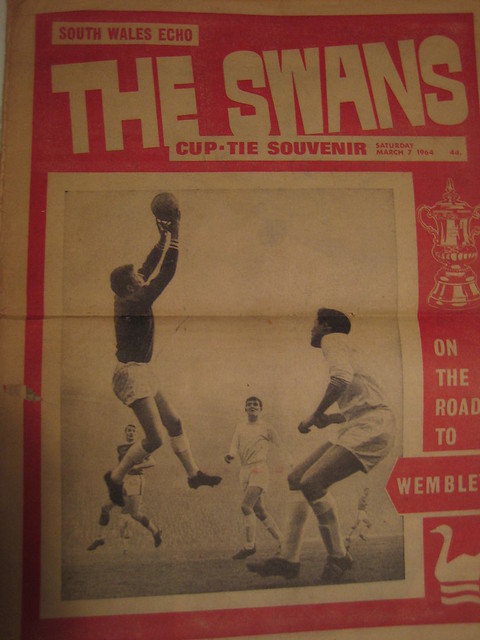