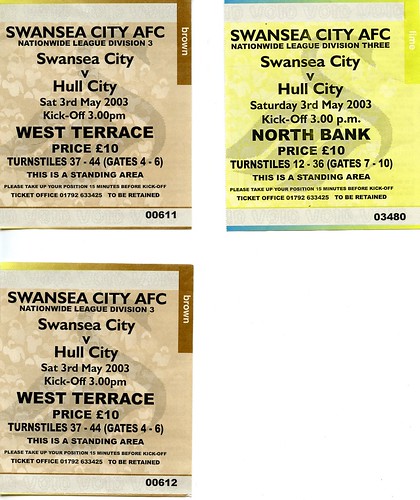 2001 – 2003 saw perhaps the lowest point of the club’s fortunes, with its very existence and league status under threat. After an unparalleled period of uncertainty over the ownership of the club, and a chaotic sequence of management appointments and sackings, the team unsurprisingly slumped on the playing field. Relegated to the Third Division in 2001, the roller-coaster took the Swans to the very brink of falling out of the league into the Conference for the first time in its history. Management comings and goings saw Brian Flynn in charge for the last game of the season. At home to Hull City, Swansea needed to win to ensure they finished above the relegation positions. 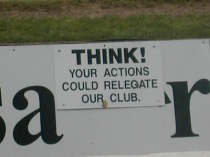 Worried about a points deduction if there was crowd trouble, the club had this sign erected on the North Bank. Some fans thought it should be facing the pitch.

A passionate crowd of nearly 10,000 “sang and chanted, roared and cheered” (South Wales Evening Post Weekend Sporting, 03/05/2003), as the team put them through the wringer. Having gone ahead with a 7th-minute penalty, the Swans managed to leak two goals before half-an-hour was up. The rising tension of the supporters was released in dramatic fashion just before the interval, when a second penalty was coolly slotted home by James Thomas. 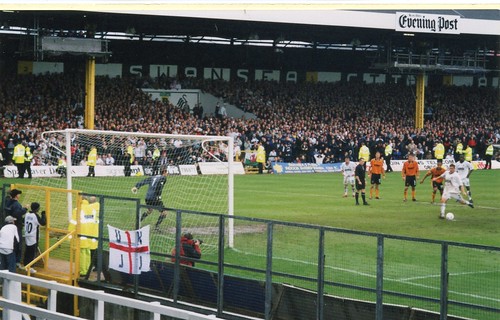 A photo of the penalty by Rob Blades

The second half saw the Swans players take a firm grip on their club’s destiny, with two more goals and a concentrated grip on the game right to the final whistle. Hull came close to reducing the deficit, but Swansea held on with determination to give the fans reason to go mad with joy.

The hero of the game was undoubtedly James Thomas, whose two penalties and hat-trick goal from open play made the difference. In the inevitable football coincidence that you just couldn’t make up, Thomas was born and grew up in Swansea and supported the Swans as a boy.

Some members of that team who carried the Swans through their lowest point have remained at the club (Britton and Tate), and no doubt some of that spirit has been instrumental in carrying the team to their current height. Roberto Martinez also played an influential part in the victory over Hull, before going on the manage the club through a crucial stage of its subsequent rise.  As a final note, current Swans’ midfielder Joe Allen was at the Vetch on that day to watch the team’s heroics. As he told BBC Wales Sport on the eve of the 2011 Championship playoff final, “The fear that the club could fall into oblivion spread down throughout the club, even down to us in the under-13s team. It was an incredible anxiety in the crowd. I can’t imagine what it was like in the changing room. Thankfully James Thomas popped up with a hat-trick and we are all here because of that.”

Watch the third and fourth goals and the scenes of celebration at the end:

Whether you were there or not, please feel free to record your memories of the match in the responses box below.

You can read Rob Blade’s memories of the game here 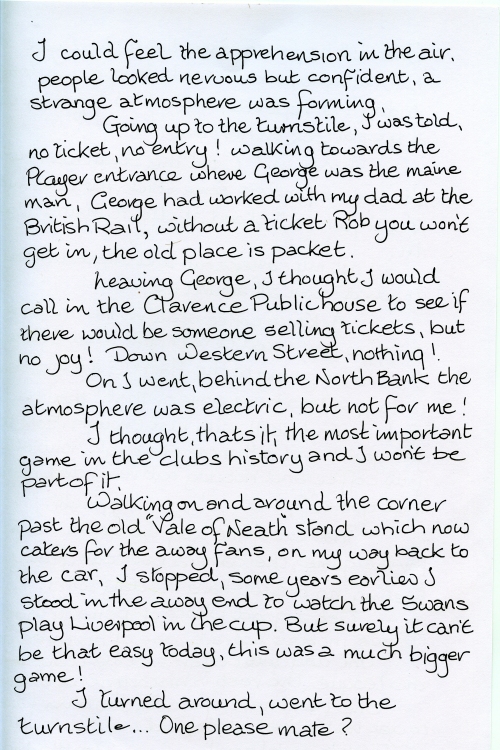 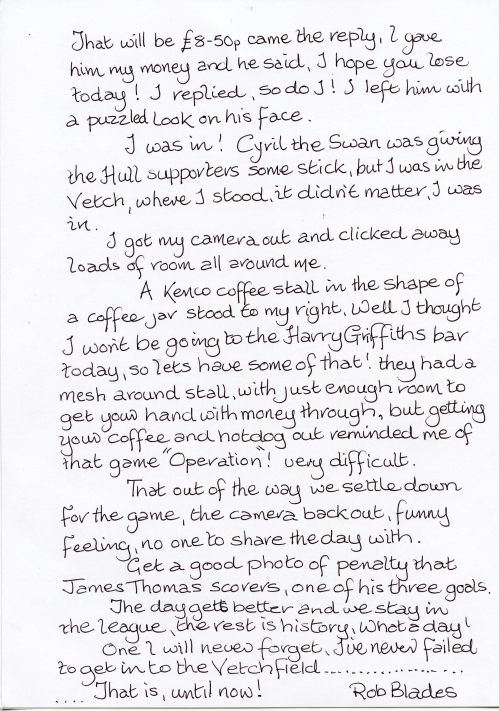