Arsenal in the Cup

On the eve of an FA Cup 3rd-Round clash at the Liberty, it is worth a peek at the two clubs’ record against each other in the world’s oldest cup competition. The Swans have played Arsenal in the FA Cup on 3 previous occasions: in 1926, 1950 and 1968.

They have also played one two-legged League Cup tie in 1980, and (so far) 7 top-flight League matches.

As part of the Swans’ incredible run to the Semi-final, they had to overcome mighty Arsenal in a pulsating tie at the Vetch Field. The line-up on the day was Denoon, Langford, Milne, Colins, Sykes, McPherson, Hole, Deacon, Fowler, Thompson, Nicholas.  Fowler and Thomspon scored the goals in front of 25,158 fans. As the Arsenal captain Buchan was quoted as saying, “Our boys did their best, but we were up against one of the cleverest sides we have met for many a day”. 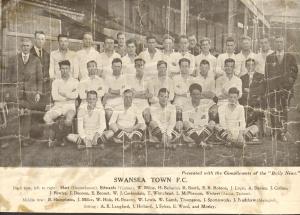 Cartoon published after Swans’ victory in 1926

The Swans lost 2-1 away at Highbury, with a Scrine goal for Swansea. Tom Whittaker, the Arsenal manager, remarked that the young Ivor Allchurch was “The player of the century”.

Is a caption really needed for this picture?

The last Cup meeting between the sides still holds the record for the Swans’ home attendance. 32,786 people somehow squeezed themselves into the Vetch, only to see the lads go down by the only goal of the match, scored by Bobby Gould. To put the crowd size into perspective, only a month later, under 4,000 watched the home draw with Lincoln City. Swans’ team: John, Roy Evans, Vic Gomersall, Herbie Williams, Brian Purcell, Davis, Humphries, Ivor Allchurch, Keith Todd, Screen, and B Evans. Note that Ivor played in both 1950 and 1968! 18 years apart! What a legend.