When Swansea Town’s application to join the Southern League was accepted in 1912, the club had nothing more than a lease on a piece of land. Over the course of the summer of that year the club had to raise money, employ players, lay a pitch and build banks, a stand and changing facilities. You can read press reports about the setting up of the club here.

Not everything was ready in time and players had to perform on a rolled-clinker pitch for the first season, making knee-pads essential. 2,000 people turned out to watch Swansea Town’s first practice match while 8,000 were at the club’s first Southern League match. Over the course of the first season, crowds were generally twice the size of those of Swansea RFC.

The club’s first ever board of directors were:

To help the club develop, the local press even printed a handy list of do’s and don’ts for the players, directors and supporters. You can read it here.

To view some pictures of players from 1912 click here.

In its first ever season, the club became only the second southern club to win the Welsh  Cup. The editorial of the South Wales Daily Post (25 April 1913) noted:

‘The winning of the Welsh Cup by the Swansea Association team has incidentally had the effect of disclosing the large proportions already reached by the local supporters of the dribbling code and the intensity of the enthusiasm. Thousands of people waited in the dribbling rain for the home-coming of the players, and a huge procession accompanied the latter from the Rhondda and Swansea Bay Railway to the Hotel, where the time-honoured custom of ”filling the cup” was observed.’ 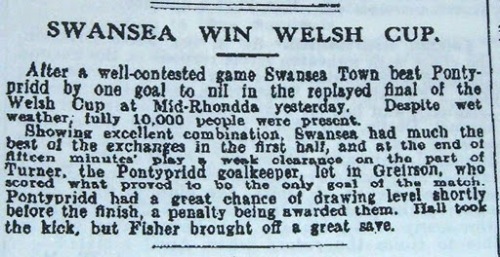 The Daily Mirror report of Swansea Town’s first trophy.
If would want to know what else was happening in Swansea, Wales and the World in this period have a look at this timeline.