Coach driver Bryan Morgan had a couple of unusual jobs when working for Morris’s in the 1980s. The firm had the contract for ferrying the Swans around, and also were asked to convey the visitors from Lokommotiv Leipzig, who played at the Vetch in the 1981-1982 European Cup Winners’ Cup. Swansea had a number of adventures in this competition as the Welsh Cup winners were entitled to entry.

Bryan remembers driving the Leipzig team around, complete with their political “minders” – the city was still in Communist East Germany at that time, and there was always a fear that players might defect to the West. The arrival at the players’ entrance in that narrow street between the ground and the prison, on an autumn evening in South Wales probably made Leipzig seem a more attractive option! 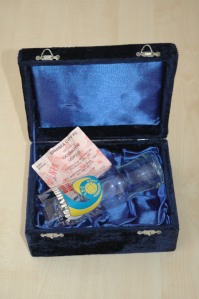 Bryan got a complimentary ticket to the game, and whisked the German players back to their Porthcawl hotel afterwards. At some point all of the Swansea players were presented with a commemorative Dresden glass in a presentation box, containing the Lokomotiv players’ signatures and logo. A number of club officials, and Bryan as the visitng team’s driver, also received a glass. Bryan has kept the glass in it’s original box (and his ticket stub) as a prized momento.

He didn’t get the job of taking the Swans over to Germany, which was just as well because they lost 2-1 in Leipzig! The home game also ended in defeat, the Swans going down 1-0, to lose the tie 3-1 over both legs and be eliminated from the competition. Clearly the souvenir glass is more memorable than the games!