The World of Sport for 7th February 1913 carried a report on the Swansea Town A.F.C. Supporters’ Club, and their search for a “War Song” for the fans to sing on the terraces. The magazine may only have lasted for this one issue, and only one copy survives in the Swansea Central Library (follow this link to find out more about The World of Sport).

The report on page 11 ran as follows:

“The above club is now going very strong, having reached a membership of 550. But it must be borne in mind that being enrolled as a member is not everything. The club, directors and players require support, both financially and otherwise, and the supporters must bear in mind these facts and rally round those who are bearing the brunt of the battle.

The prize drawing is going well. The sale of tic­kets has exceeded the committee’s expectations, over 600 books having been issued; but the secretaries would like to impress upon members the necessity of returning cash and counterfoils of books sold and mak­ing every effort to sell more. Will those who have not yet received a book of tickets kindly communicate with secretaries, Messrs. C.Rossiter, Burrows Cham­bers and W. G. Evans, 4, Richardson Street, who will see that they are supplied.

It was satisfactory to find about 200 members availing themselves of the cheap tickets issued to Merthyr on the 25th ult., and it is gratifying to know that they made their presence felt, which greatly encouraged the team to victory. Let us hope the trip that is being arranged for the semi-final v. Cardiff City on February 15th will be patronized to a larger extent.

The Supporters CIub are holding a Smoker at the Royal Hotel on Saturday next, February 8th, at 8 p.m., when a charge of 3d. will be made to cover ex­penses. This   is   necessary   owing   to   the expenses incurred, the committee deciding that in order to avoid a  repetition of what   happened at previous smokers when numbers were crowded out, it was better to pay for   comfort.     The   following-   artistes   will   appear :– Messrs. Andrew Bell, B. Francis, Dennis, G. Parkes, W.G.K. Onley, H.   Lovell, A. Peters, Alf. Thomas, Syd Jones, D.J. Squires, W.J. Barlow Harry Devine and the Victoria Glee Party.

The subject of a “war song” has several times cropped up at our meetings and the editor of the “World of Sport” took the matter up, with the result that at the smoking concert on Saturday the supporters will have an opportunity of hearing the song, which will be found in another column, sung by the author.”

It seems like the perennial problem of getting people to actively work for the club, from a large pool of members, was there from the beginning. The exhortations to help raise money have been made so many times over the years, and it seems there will always be a dedicated few who “bear the brunt”.  Although the Supporters Trust won’t be holding any more “Smokers” they will be holding their annual awards dinner ro raise money for the club in a few weeks time.

As for the War Song, how that was received at the Smoker we will never know, but it is hard to imagine catching on!  Follow the link: The War Song to read the lyrics.

A facsimile of the page from The World of Sport is below. It is interesting that the Supporters’ Club had a crest with a swan on it from the beginning, and there can be no doubt that the club has always been known as The Swans. Facsimile of page form The World of Sport, 1913 (courtesy of Swansea Library) 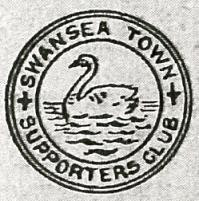