The very first known Swansea song was the “Swans” War Song from 1913, which was discovered in an obscure sporting magazine in Swansea Library. It was quite wordy and it’s not clear whether it caught on.

Between the wars, however, Swansea fans certainly sang.  Their repertoire was mostly army songs learned during the First World War, Welsh hymns and music hall songs (the equivalent of today’s pop). Occasionally, the words would be changed to celebrate the Swans. Most notably, in celebration of the forward Jack Fowler, “Chick, Chick, Chick Chicken, lay a little egg for me” was changed to

Fow, Fow, Fow Fowler, score a little a goal for me
We haven’t had goal since last time
And now it’s hald-past three

One popular music hall song amongst Swansea fans in the 1920s was “I’m forever Blowing Bubbles”. There have been suggestions that West Ham United picked up its now iconic song from the Swans but this seems unlikely given the tune’s popularity across Britain.

It was not until the later 1960s that crowds across Britain began to sing what would be recognised today as football chants. This was an evolution of the new fashion for pop music, with its simple harmonies and repetitive words.

These chants developed into a key part of Swansea City fan culture in the 1970s. By then the club was struggling on the pitch and crowds had dipped dramatically. Older men, in particular, had begun to stay away, leaving younger fans to define the atmosphere in ways they liked. Songs and chants became cruder, with swearing and declarations of dislike and even violence towards rivals Cardiff City and to England in general. This continued into the 1980s and 90s and provided a sound track to the hooliganism of the era.

Many were adaptations of songs and chants used by clubs across the UK. The tunes and lyrics were simple and their popularity ebbed and flowed across the seasons.

The club was keen to encourage Swans songs too and in 1972 even held a competition to find a new one. 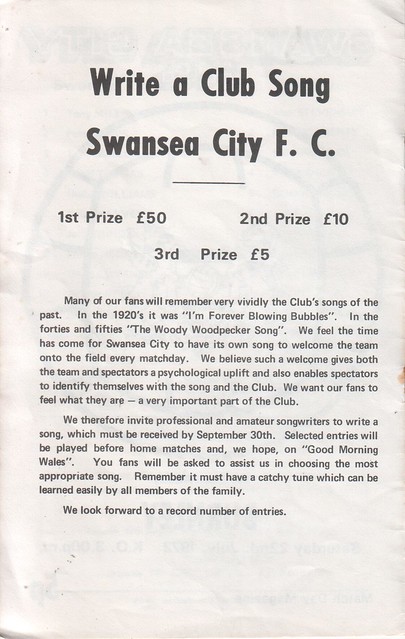 The most important and original Swans song is ‘Swansea City’ by  Roger Evans. It was released in 1979 as his first single and features some of the players on backing vocals. It quickly became a cult song, adopted and sung by the fans at every game.  The verses tell the story of the Swans playing Spurs in the League Cup in 1978, while the chorus celebrates the Vetch Field ‘way down by the sea’. Even in the new Swans’ new home, the song remains a key part of what supporting the Swans is all about. The B Side was the Ballad of Swansea Jack.

You can listen to memories of the song being written, created and performed here.

Listen to the Swansea City song being sung at Wembley 2011

At the Vetch not every part of the ground sang.  In later years, the North Bank, which held over 5,000 of the ground’s 12,000 capacity, was the focus of the most noise. In terms of what songs are sung, the North Bank could be loosely divided into three sections:

Subject of songs/chants on the North Bank

Of course, these sections were not neatly defined and blurred into one another, particularly at the better-attended matches where space was limited. Nonetheless, any regular of the North Bank (or indeed anywhere within the Vetch) would have recognised these divisions and consciously chosen where they stood on the terrace in accordance with how comfortable they felt with the songs and chants that would surround them. The west end of the North Bank was significant in that it was the part of the ground nearest the away stand and thus the best location to taunt visiting fans.

You can listen to some songs from the last few years here. If you are a Cardiff City fan or uncomfortable with bad language you may be offended.

After the Swans moved to the Liberty in 2005, the fans who had once stood on the North Bank were dispersed around the ground, although many tried to congregate in the north-east corner, a spot again important for its proximity to the away end. This dispersal, along with the subduing effects of sitting down, meant less obvious singing than had been the case at the Vetch.

The change of grounds also saw a rise in the number of women and families at games and the general match-day atmosphere became less hostile. One product of this was the emergence of the chorus of Max Boyce’s “Hymns and Arias” as the most popular Swansea song. Originally part of Welsh rugby culture in the 1970s, the song was certainly not unknown at the Vetch but its catchy melody and inoffensive lyrics gave it a new potency at the Liberty where it appealed to everyone rather than just the fans for whom offensive songs were all part of the fun of football.

The old songs were not forgotten, however, and they continue to define the experience of a Swans away game, where their defiance seems more in keeping with the experience of being in a minority on ‘foreign turf’.

Swansea fans have also been prompted to make their own pop songs. Here you can listen to Swansea City by Teen anthems

There are many more recordings at the excellent https://www.fanchants.com/football-team/swansea_city/