When football turns into poetry

Today we are showing you the story of Shirley, a big fan who used to live close to the Vetch. She loved the atmosphere around the stadium before and after matches. She loved, and she still does, the Swans to the point that she wrote a short poem about the players. Here are Shirley’s memories in her own words:

The Richardson Street entrance to the Vetch field was just 150 yards away.

As a small child I would walk up and down the street admiring the cars and trying to recognize the models. When the match ended crowds of people would appear and I was always interested in the result of the match. I could usually guess the result from the expression and mood of the fans as they passed my home. This is when I first started to be interested in football I suppose.

By the time I was about 10 years old I was aware that the gates at the Richardson Street entrance were opened 10-15 before the end of the match. This was to prepare for the surge of fans at the end of the game and also to let out early  leavers.

So it was that I began to experience the game of football by nipping in to watch the last 10 minutes for FREE!

In my late teens I worked for a while in a grocery shop in Argyle Street owned by my father.

The best part of working there was that the Swans players used to go past most week day mornings on their way to the beach for training. My heart missed many  abeat on seeing my Hero’s go past. Here is a poem I wrote at the time:

The Swansea Soccer Teams or The Graceful Swans

A is for Allchurch so young and so fair.

B for Beech and Burns a very worthy pair.

C is for Canning with fingers of butter.

D stands for no one, I regret to utter

E  as for D has no place in the team

F is for Feeney now only a dream.

G is another without any place.

H yes another that’s not in the race.

I which is also counted as nil.

J is for James the place of Feeney may fill.

K is for Keane who stands good defence

P is for Perry, Paul too, he’s a quibbler.

Q+R yes you have guessed stand for none.

S is for Scrine for the first team he’s done

T U V they couldn’t wear a slipper with

W for Weston a popular skipper.

whistle and call it time.

*L is for Lucas I quite forgot, in his black

book I make a great blot!

I also got to know the Swans trainer Frank Barson. He often came into the shop of an evening for his fruit and Lemonade.

One time he was kind enough to give me a tube of cream to treat my chilblains. He said it was what he used for the players. It work wonders and certainly made me feel really special.

The team and trainers etc., did a tour of France during the summery break (I believe it was 1952/53). Frank Barson brought me back a few souvenirs one of which was a badge/Pin which I still have and treasure [See image below].

These were wonderful times to look back on.

I continued to support the Swans throughout my teens, twenties and thirties, taking  any opportunity to travel to away games that I could and, of course, the Vetch became my second home! I attended almost every game played there, including Combination, Welsh League, School Boys and even the local teams that were given the privilege to play their finals at the end of the season, at the VETCH!

You may have guessed by now that I am FEMALE and no I didn’t marry a footballer but my husband’s claim to fame is that he went to school with John Charles (they were in the same class) and they played football together both in school and out of school.

My support for the Swans has never wakened and, although I do not attend many games now, I still remain an harder fan and follow their progress by the media, TV, radio and press.

I await the coming season with great anticipation. 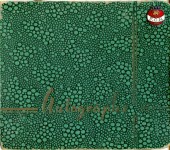 Her notebook for players’ autographs: on the top right the pin given her by Swansea Town’s manager Frank Barson.

Her passion is also testified by a patch she herself made for her blazer, shaping it around the model of a photograph she had cut out from a newspaper article. She kept that article, along with many others, in a diary about Swansea AFC’ players and matches she used to write when she was a teenager.

Shirley’s diary with the press cutting used as a model.

The Swans patch realized by her.

Shirley wearing the blazer with the Swans patch on it.