When the WRU banned a Swansea Town director from playing rugby

The story of Swansea Town director, Dudley Folland, banned from rugby by the WRU for being involved in professional football. Source: Leeds Mercury, 18 January 1939. Click on the image to enlarge. 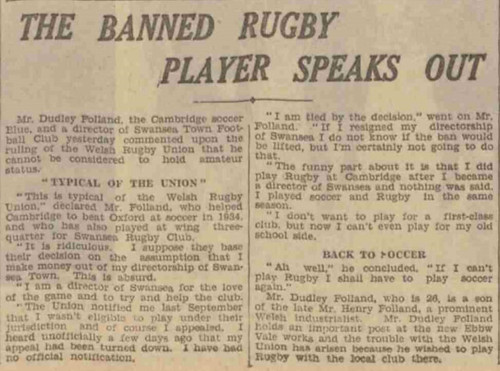 Click to enlarge. The Board Room under the Centre Stand. Later this room became part of the Harry Griffiths Bar.

This is the advice The Cambrian newspaper (13 September 1912) gave to the new Swansea Town when reporting the club’s first ever match.  Somethings don’t change much!

Don’t lose your temper; loss of temper means loss of form, and sometimes the match.

Don’t play to the gallery. Goals count, not pattern weaving.

Don’t be too hasty in putting up prices. It often cuts down the average attendance.

Don’t forget that players are human beings, not machines.

Don’t think your team is the only one that can play a clever game. There are others.

Don’t desert your team when they strike a bad match. That’s when they want your encouragement most.

Don’t blame the referee for your defeats. Take them as men.

Don’t go to see one team play. It takes two sides to provide your sport. Give them both a share of your cheering.