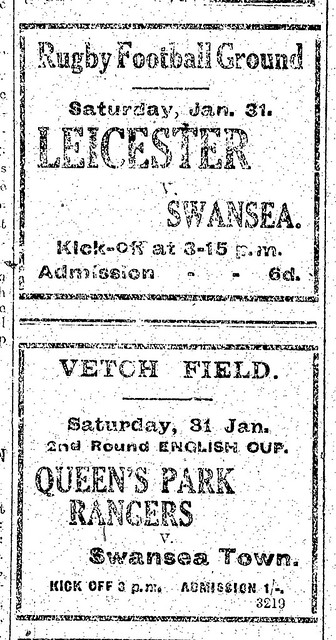 As the 2011-12 season drew to a close one of the inevitable topics among Swans’ fans, and football supporters in general was undoubtedly the cost of following your team. With Premier League away tickets often costing £40 to £50 the price of success is often felt where it hurts – in the pocket. Yet even these days there would be a shock if the Swans were to double the admission price for a special home game – and that’s exactly what happened in January 1914.

Having narrowly failed to add promotion to the Welsh Cup in their first ever season, Swansea Town were obviously hoping to add yet more glory in their second campaign at the Vetch – and although once again the great prize of promotion was to elude them it was the F.A. Cup – usually known in those days, and not just in Wales, as the English Cup –  which captured the imagination of supporters and the press. Swansea Town entered the competition in the Preliminary Round, as they had no record in the Cup to draw on, and though it is very hard today to trace all the results it seems that the Swans had won no fewer than seven ties when, having beaten Merthyr and become the first Welsh club to reach Round 2, they were drawn against Queen’s Park Rangers who were in the Southern League Division 1. Excitement was high in the town as this represented the last 32, equivalent today to perhaps a Conference club reaching Round 4 and mixing it with the Premier League giants. But before the game could be played there was the controversy of the “gate” money!

On the Wednesday before the game the South Wales Daily Post’s London correspondent reported that confidence in London about QPR progressing had taken a blow with a heavy defeat at West Ham the previous Saturday, though Rangers were fielding a full strength side apart from their “brilliant winger, Jones” who was injured. They would travel to Swansea on the Friday accompanied by up to a thousand supporters on a special train concerned at facing a side who had already accounted for two Southern League First Division teams.

In Swansea, however, talk was all of the increase in the ground admission from 6d to one shilling – a 100% rise! Costs had apparently almost doubled from the Swans’ first season, wages and ground improvements having taken their toll – remember a turf pitch and a grandstand had appeared at the Vetch for that second season. Merthyr and Llanelly were apparently struggling financially and the Swans’ directors did not want to waste the chance to pay off some debts. The supporters were less impressed and their letters were summarised in the Post. Some alleged that it was the fault of the visitors and pointed out that Merthyr had only charged 6d when QPR had visited in the League. “Gougho” suggested supporters would rather go to watch the rugby than part with their shilling, but “Soccer” pointed out that the directors had not agreed to switch the game to Rangers’ Park Royal ground, where the gate charge would have been a shilling anyway and Swans would have forfeited the ground advantage.

So what else could these indignant letter writers have done for entertainment that week? Well, there was a huge range available in those days before radio and television. The Cinema was still in its infancy with silent movies which were mostly on a single reel, so if you went to the cinema you had a full bill of entertainment rather as you would have had in a variety theatre or music hall. Prices ranged from only 3d up to a shilling for the best Circle seats. These advertisements give just a few of the choices; “In Peril of the Law” a “sensational melodrama 3,100 ft in length” at the Castle sounds as if it might have equalled a cup-tie for thrills and there was orchestral music too – which you certainly wouldn’t get at the Vetch.

At the Vetch your controversial shilling would only have paid for a view in the open on an earth bank. In Oxford Street however you could enjoy the palatial luxury of Swansea’s newest cinema, the Carlton. This stunning building, which Swansea residents still know well as the home of Waterstone’s bookshop, boasted 900 seats on “sumptuous premises” with “no pillars to obstruct the view”. Built in a Renaissance style it had cost £20,000. Again there was an orchestral band,  it boasted concealed lighting, and the best seat in the Circle would have cost you just the shilling the Swans were demanding for the QPR tie.

If your interests were more educational you might have been tempted by the illustrated lecture on Scott’s fatal polar expedition. On Thursday that week a “large audience” at the YMCA’s Llewellyn Hall building was “thrilled” by a talk by Mr Frank Wild, who had been a companion of Scott’s on earlier expeditions and was due to accompany Sir Ernest Shackleton on his attempt to cross the Antarctic continent. The lecture was accompanied by “limelight and cinema views” and due prominence was given to the heroism of local man Edgar Evans who had died with Scott.

And, of course, there was always rugby union, the well established alternative. The All Whites were also in action on Saturday 31st January – and by coincidence also had big name opposition from England as Leicester were due to visit St Helen’s. And their admission price was still the traditional sixpence, as these advertisements show clearly:

Though how much you’d be able to see by the end of a 3.15 kick off at the end of January is doubtful – no limelight or concealed gas mantles at St Helen’s! A final alternative was absolutely free. The controversy over Votes for Women was at its height and at the Junior Imperial League, Castle Buildings on Monday a debate was scheduled between pro and anti Women’s Suffrage speakers. The organisers must have bee aware of the Cup-tie gate controversy, because they billed their event as a “Great Suffrage Tie” with Alderman David Davies as “Referee” and a guarantee of “No Gate Money Charged”!

Friday’s Post contained a long letter from the Swans’ Chairman Mr Frank Newcombe justifying the price increase. “No match of the same importance has been played in South Wales before” he claimed. “The contest for the English Cup is everywhere recognised as THE EVENT OF THE SEASON.” Further worrying news for Swans’ supporters was the price paid for a 2-1 victory at Oswestry in the Welsh Cup on Thursday. Captain Jack Nicholas was injured and would not face QPR; while the directors (not the manager in those days) had to decide between the claims of Messer and Mayo for the right wing spot after some disappointing recent performances. If Swansea Town won they would be the first ever Welsh club to reach the Third Round and the Daily Post reflected the excitement by printing a picture of the  “doughty” Rangers team, champions of the Southern League only the season before last.

After all this it was perhaps inevitable that the match itself turned out to be a bit of an anti-climax. The price increase possibly kept the attendance down a bit – at 14,000 it was the third highest of the season after previous cup ties against Merthyr and Cardiff City, who presumably attracted a larger travelling support. The record gate takings for a football match in Wales, £770, presumably justified the directors’ decision. On the field, though, the absence of Nicholas and what seems to have been an all round nervous performance did not help and Rangers won 2-1 despite Swansea taking an early lead – a disappointment but not a disgrace. “Ajax” felt that “the Swans form was the poorest they have shown in the whole English Cup series” and that if they had played as well as they had against Cardiff and Merthyr the result might have been different. The Swans did not lack effort but their passing and combination play was inferior to QPR; the degree of disappointment reflected in the press reports, however, emphasises just how far the Swans had already come.

You can read the press clippings here.