1914: When football was accused of being unpatriotic

In August 1914 war broke out in Europe, driving much of Britain into a patriotic frenzy. Within days, all rugby matches in England and Wales were suspended to help the nation to concentrate on the push for victory. 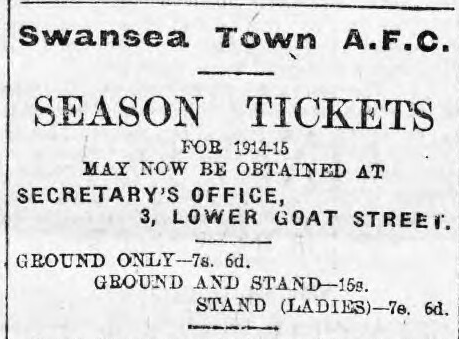 Football, however, took a different lead. Like so many people, clubs and the FA assumed the war would be over by Christmas. As a professional sport, it had players’ contracts to pay and thus to avoid short-term losses and disruption, football decided to play on. The FAW claimed to do anything else would be “panic legislation”.

This began a barrage of criticism of professional football. Newspaper articles and letters  across the country accused football players and fans of being unpatriotic.

One letter to the South Wales Daily News declared: “It is unimaginable that people could look on at a game of football and forget themselves in the ecstasy of a winning goal at the moment when their comrades, maybe brothers, are making gallant and stupendous efforts at the front, even sacrificing their lives for the life of the nation.”

Of course, many fans and players did enlist but those who remained found themselves subject to public pressure in newspapers and even at games. In November 1914, one Swansea newspaper hoped that young men who were looking forward to the next week’s football fixtures would realise how serious the international situation was. It wanted them to do their duty and join the “nobler and more exciting game” of war.

Similarly, a speaker told a recruitment meeting in Mount Pleasant in Swansea that “At a time like this, attention should not be directed to kicking a football but kicking the enemy out of France and Belgium”.

Swansea Town AFC came under pressure too. At the start of the war, the military authorities decided to requisition the Vetch Field. The club objected, pointing out that it had players to pay and could not simply give up its ground without compensation.

The club chairman told the press that he and the directors were all patriots and quite happy to let the military give recruitment lectures at Swans matches. That happened at subsequent games and in the end, club won its appeal against losing the Vetch on the grounds that no financial compensation had been offered.

The anger of the press towards football does not seem to have been representative of wider opinion. It owed much to hostility to professional sport and class snobbery towards a working-class game.  But football struggled anyway.  Falling attendances, longer working hours and restrictions on rail travel all caused problems and professional football decided to put itself on hold at the end of the 1914-15 season.

But some people’s memories were long and the early 1920s saw some Welsh and English schools switch from football to rugby, while the football authorities became very sensitive to any criticism that might suggest they were too preoccupied with financial matters. Instead, they put considerable efforts into persuading people football was a patriotic sport.