Swans at War: In Memoriam

In 2014 the Supporters’ Trust unveiled a plaque at The Liberty Stadium to commemorate the three Swansea Town players or former players who were killed during the First World War.  The three were popular figures who had played for the club during its early years, and even though none of them were local boys their loss was very keenly felt in Swansea.  Lest we forget, we remember them as members of the Swans community who made the ultimate sacrifice while serving their country in the Great War of 1914-1918.

Spencer Bassett was born in 1885 in Blackheath, Kent, and made his name playing for nearby Maidstone United.  His early promise was such that he signed for Arsenal in 1909, but, having scored one goal for the Gunners, he soon moved on to Exeter City where served as a reliable centre-back for three seasons.

Spencer joined Swansea Town for the 1913-14 season, making his debut in a Southern League Fixture against Caerphilly.  In all he made 32 league and cup appearances for the Swans, scoring two goals in an 8-0 victory over Treharris in February 1914. By now a skilful and clever right-half, he initially re-signed for the 1914-15 season but in the upheaval and uncertainty caused by the beginning of the war he eventually joined Southend United.

Whilst with Southend Spencer enlisted at Woolwich to serve with the Royal Garrison Artillery, and by 1917 he was Acting Bombardier with the 140th Siege Battery. He was wounded in the early stages of the Battle of Arras, and later died of those wounds, aged 32, on 11 April 1917.  He is buried in the Pozieres British Cemetery, Oviller-La Boisselle. 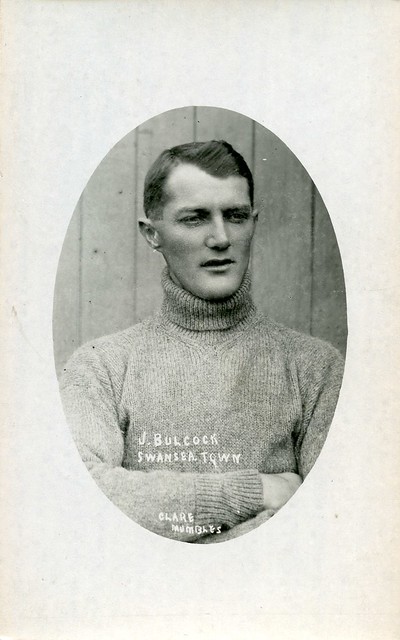 Joe Bulcock was the son of a Burnley cotton weaver. He played reserve team football for Burnley and Aston Villa, before going on to appear for Bury and Exeter City. He then spent five seasons with Crystal Palace, where he developed a reputation as one of the best backs in the Southern League. He was part of a representative team the FA sent to tour South Africa in 1910.

Bulcock joined Swansea Town late in the 1913-1914 season and went on to captain the Swans on number of occasions, including in their famous 1915 FA Cup victory over Football League Champions Blackburn Rovers. That match’s programme contained a pen portrait of him, describing him as a favourite on and off and the pitch. Unusually for a footballer of the time, the accompanying photograph showed him wearing a bow tie and boater hat.

After professional football ended in the summer of 1915, he lived in Llanelli and worked as a plumber’s mate. He joined the Welch Regiment as a private in December 1915 and was sent to France in September 1917. He died on 20 April 1918 of head wounds received at the Fourth Battle of Ypres in Flanders. He was 38. He is buried at Haringhe (Bandaghem) military cemetery in Belgium.

Ted Mitchell was a native of Middlesbrough who joined the Swans from Reading in 1913 as a forward, but who soon found his niche in the Town side as a sturdy and tenacious left-back. To the newspapers of the time he was ‘a popular hero’ whose versatility was appreciated. When he was moved to play on the right wing for a FA Cup tie against QPR, the report declared that his ‘dash’ was ‘extremely useful’.

Ted was a reservist, and so was called up immediately on the onset of hostilities: a great crowd of Swansea supporters turned up to cheer him when he left by train on 5 August 1914. He was at the front by 9 September, serving with the Royal Field Artillery but at the end of the month he was in a French hospital with a bullet wound. He returned to action and was promoted to sergeant.

Ted returned to Wales briefly in the summer of 1915, to marry his sweetheart Dolly Jones of Llandeilo on 22 July. The newspaper report notes that he ‘went to the altar in mud-besmeared khaki’: four days later he was due back at the front.

He was killed in action on 6 January 1916 and he was widely mourned by Swansea’s fans as ‘one of the most popular of all the Swansea Town players’. He is buried at Bethune town cemetery.

One response to “Swans at War: In Memoriam”