The first part of our public exhibition has opened in the Swansea Museum (http://www.swansea.gov.uk/index.cfm?articleid=1076). The illustrated panels tell the story of the first 100 years of the club, with some great pictures. There are also items on display lent by Swans fans  for the exhibition.

It will run until the end of January next year.

The second half of the show will start in the National Waterfront Museum from December 22nd, and this will feature more about Swansea City as a part of the wider world of football, in Wales and beyond. 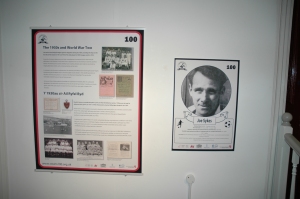