Guillem Bauza wrote his name in Swansea City folklore as his quick fire brace just before half-time sealed promotion to the Championship for the Swans. The Jack Army were in a jubilant mood after the game where 1,500 fans made the five hour journey to Kent. For those who could not get their hands on a ticket, Swansea Cityopened its stadium to allow around 2,000 Jacks a chance to witness Roberto Martinez’s men reach the Championship. The win not only took Swansea into the second tier of the league system for the first time in 24 years but also set a club record of 86 points, beating the 85 of John Hollins’ 1999-2000 side.

The away stand failed to provide a roof for the Swans fans and prior to kick-off April showers lashed down on the supporters. The atmosphere that was generated though was electric. The Evening Post described it as a ‘Wall of noise’. The fans, wearing thin, yellow macs to stay dry, were determined to not allow the rain to dampen their spirits. The Post believed had it been a covered stand ‘ears might well have been bleeding’.

Though it seemed Gillingham had not read the script, especially ex-Swan Dennis Oli, who gave the Gills a 22nd minute lead. A tense cloud hovered over the Swansea supporters – both atKent and back at home. Though in every important match, there is always a hero, andSwanseaCity found one in Guillem Bauza.

The Spaniard first bundled in a goal after Andy Robinson’s shot, and then fired his second across the Gillingham goal-keeper from an acute angle. The Swansea fans had barely finished celebrating Bauza’s first goal when the striker gave the Swans the lead, and it would seem the away stand was about to collapse with the sheer bouncing, that was only supported by scaffolding.

This was hardly a stylish performance that the Swans had produced for much of the season, but Swansea laboured their way to victory behind a chorus of Bread of Heaven and Hymns and Arias. Life-long Swans fans, Tony Christie claimed it was ‘one of the best days ever in football, alongside when we were promoted to the Old First Division’. For all fans connected, this truly was a special day in the history of Swansea City. 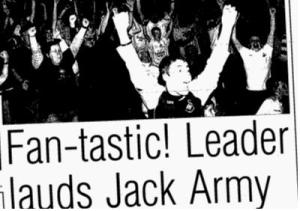